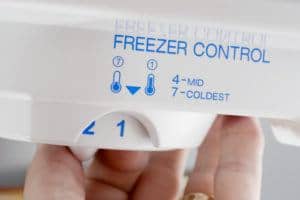 Maybe you’ve heard that alcohol doesn’t freeze. This urban myth needs to be eliminated once and for all. Alcohol does freeze. It just won’t freeze under the conditions that are created by your average home-based freezer.

Most alcoholic beverages require a minimum of -173F to freeze. By comparison, the average home freezer is typically operated at a temperature of -9F.

Now here’s what is interesting about freezing an alcoholic beverage like beer. For your average grocery store beer, it’s made of 3.2% alcohol. That means the other 96.8% of the ingredients, much of which is just water, can freeze when you place it in the freezer.

That’s why a bottle of beer left in the freezer too long becomes like slush. The alcohol isn’t really frozen, but the rest of the beer is.

Why Putting Beer in the Freezer Is a Bad Idea

Putting beer into the freezer to quickly chill it is a good idea. Leaving beer in the freezer in a container that is unopened is a bad idea. As the ingredients begin to freeze, the beverage will begin to expand. If enough expansion occurs, the bottle or can of beer can burst and leave you with a sticky mess to clean up afterward.

Not to mention put glass or aluminum shards into your ice cream.

How long does it take for beer to freeze? That depends on the alcohol content in the beer. Low-content beer can freeze in 1 hour or less. High-content beer could take 4-6 hours to freeze.

When you freeze beer, the proteins within the beverage come under great stress. The structure of the protein will begin to break down, which is why frozen beer tends to appear hazy. With repetitive freezing and thawing, those protein structures can appear to be flakes of junk that float in your beer. At this point, you’ll just want to toss the beer because it’s going to taste worse than funky.

How to Save Your Frozen Beer

To keep your beer tasting as good as possible after being frozen, you’ll need to have the carbonation within the beer reintegrate into the liquid. This takes time. If you open a beer that was frozen before the carbonated gas was able to integrate itself back into the beverage, then it is going to be flat and flavorless.

In most circumstances, you’ll need to thaw a beer in the fridge for 24-48 hours so that it can properly recover.

Is frozen beer still good? Sure it is. Just give it some time to recover and you’ll be fine. Remember to store your beer in one of the best beer fridges that are designed to keep your favorite beverage cool for best results.