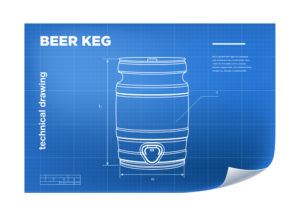 If you enjoy beer, then knowing when and how to buy a keg is a very good thing. Although kegs are often associated with celebrations and parties, if you own the best outdoor kegerator or a great mini kegerator, then a keg of beer can be something you’ll enjoy at home every time you have the urge to crack open a cold one.

Now there are some common questions that people have when purchasing a keg, especially when it’s their first time doing so.

The last question there is probably the most important.

One Keg Size Chart to Answer All Your Questions

There are several different keg sizes from which to choose. That means the answers to your keg-related questions are dependent on the keg size we’re talking about. The following keg size chart can let you know how much beer to expect with your purchase.

It is important to remember, however, that this beer keg size chart is a reference for beer that is brewed and sold in the United States. If you’re purchasing beer from a different country, then the kegs are going to be listed in “liters” instead of “gallons.”

Standard sizing for international kegs is 30 liters or 50 liters, or 7.9 gallons and 13.2 gallons respectively.

How Much Money Can I Save with a Keg?

If you hook up a keg of your favorite beer to a brand-new kegerator, then you can save some big-time cash. Let’s take Guinness as an example to discuss monetary savings.

The average cost of a case of Guinness is about $35. It can be a little higher or a little lower, depending on deposits, taxes, and transportation costs in different regions. If you were to purchase a half-barrel of Guinness, the average price would be $167.

Now yes – that’s an investment. Spending $167 on beer instead of groceries might have you sleeping on the couch for a few nights. What do investments do? They pay dividends.

For the same amount Guinness to be consumed by the case instead of by the keg, you are going to save over $70. That’s right. It’s the same beer with the same number of fluid ounces, but because you’re buying it in bulk instead of as individual servings, you save some cash.

That means it will take about 8 kegs of Guinness to make your kegerator investment break even. Now you’re not sleeping on the couch anymore.

Even cheaper 3.2% domestics, like Coors Light, are cheaper by the keg when compared to case-based pricing.

Most half-kegs can handle up to 8 weeks of storage in a properly maintained kegerator so your preferred beer stays fresh.

If you love beer and you’re tired of spending tons of cash on it, then make the investment today. Grab a keg of your favorite brew or fill one up with your homebrew. Use the best kegerator for the type of keg you prefer.

Then you will have more moments throughout the week where cracking open a cold one makes good sense.