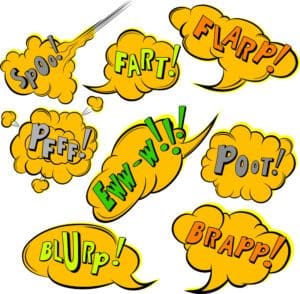 Beer can come in many forms: carbonated, nitrogenated, or both. Because the beer is injected with gas, it can give you gas. That means a few beers will likely lead to a few farts.

It’s not just the carbonation that makes beer want to provide some bloating to your digestive tract. The ingredients which can be found in most beers, such as maleic acid and ethanol, also promote gas formation within the digestive tract.

The severity of this gas will also depend on your current health status. Certain conditions can enhance the gaseous effects of drinking beer. That may include acid reflux, stomach irritation or ulcers, a gluten intolerance, or an alcohol intolerance.

What Can Be Done to Stop the Farting?

If you find yourself more than a little gassy after having a couple of beers, there are some steps you can take to limit how much farting happens when you drink.

How you drink or pour the beer will also affect how much gas you receive when indulging. Try using glasses that have been etched at the bottom because this can reduce the carbonation levels and potentially improve the head.

Minimize beer agitation while pouring and drinking as well. If you shake beer, it’s a lot like a can of soda. The carbonation becomes active and you’ll feel bloated before you even finish your first beer, even if you’re using one of the best outdoor kegerators to fill up your cup.

How to Cope with the Gas from Beer

If you feel like your stomach is becoming distended and you feel the urge to burp or fart a lot after drinking a beer, then give in to the urge. Retaining the gas in your belly can be a painful experience.

For those who face this issue every time they drink, consider pre-loading a medication that helps to deal with gas. Several options are available to you over-the-counter, with many of them using simethicone or magaldrate to provide relief. Look for a product like Tums or Gas-X and choose extra strength options if you regularly encounter pain with beer-associated bloating.

If you still find no relief, switch beers. It isn’t just the carbonation that can be problematic to bloating and gas formation. The sugars in certain beers can contribute to the problem as well.

Does beer make you fart? It sure does. With some better beer management, however, you won’t be forced to stink up the place when you’re ready to crack open a cold one.